I generally find it bad taste to summarize someone else’s words on my own blog, especially if I have less experience in the matter and have nothing to add. So head on over to Bestsellerology and read “Building a Plot, One Step at a Time” by Suzanne Johnson.

I hope y’all are getting in more words than I have been. Let’s get motivated, brainstorm little rewards after so many words written (one of mine is painting my toenails, another is eating OREO-topped pudding), turn off distractions, and write now.

Today: My Writing Space, Plot-driven Versus Character-driven Stories, Manuscript Format, and Shutting Up the Internal Editor.

I thought it might be fun to share what my writing space looks like. Not the interior of my house, because I write all over the place. Also my desk is a mess.

You can tell already this will be a frenzied post, can’t you? 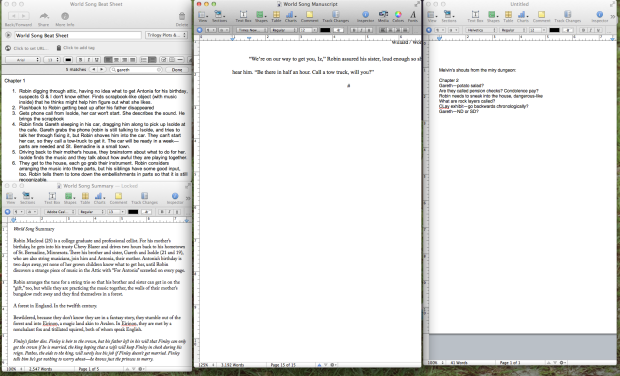 As you can see, I cover nearly every pixel of my screen. On the upper left is my beat sheet, written in Evernote.

On the lower left is a summary I wrote for the novel. It helps me to get the broader picture of what I think will happen.

A note about planning plots

Though I do plan plot (as you can tell from my series on plot), I also make sure that what I am writing is character-driven. THESE ARE NOT MUTUALLY EXCLUSIVE. You can write character-driven stories and still have an idea of where you are going. There’s a difference between a plot-driven novel and a plot planned one.

Let’s say you are planning a road trip across country. You plan your route ahead of time, and you have a rough idea of where you are going. But your route takes you to a road with a closed bridge. If you adhered to the plan without faltering, you’d blast through the “ROAD CLOSED” barriers and traffic cones and gun it, hoping that your tiny sedan can make the jump and land on the other side. This is what happens when a story is plot driven. It might have a lot of excitement, but it usually doesn’t end well for everyone involved, and along the way, you’ll make somebody say, “What the heck just happened?” and not in a good way.

But, it you come up to that closed bridge and you take a detour, you change direction. Maybe you even change your destination, having an existential moment where the sun breaks through the clouds and you realize, It’s not the destination, it’s the journey. That’s the way a person writes something character-driven. It’s fluid and organic, not rigid and contrived.

But that doesn’t mean you can’t have a plan to begin with. In my opinion, you’ll have fewer projects that die by your hand if you make an effort to think towards a possible ending before you even start. I can’t tell you how many stories I’ve written that didn’t work. My current novel has already been scrapped and started over a few times. Here’s to hoping I’m heading in the right direction this time, because I truly love these characters.

Back to my writing space

Here it is again.

In the middle is my manuscript. I really hate writing in Times New Roman, but I decided to format my novel in the standard Manuscript format from the get-go. Some people want you to use Courier, others Times New Roman. This is how you format your novel manuscript. Remember, though, to check and see if an editor or agent has specific requirements before submitting.

Some people have semi-sadist daydreams about their internal editor, and what it takes to shut him/her/it up. With an internal editor like mine, if you fill his mouth with cotton balls, he’ll just start humming “It’s a Small World, After All” until you let him go. So I’ve found it works best to throw him into a cellar and let him shout out a couple of things now and again through the air vents. That document is a collection of his nags and pointers. I’ve found it’s best to acknowledge the internal editor, but rather than make the fixes, write the problems down on a sort of “Honey-do” list I’ll address during rewrites. Then I can keep writing quickly.

I (Lara) am going on vacation! Sort of…moving isn’t really relaxing, is it? To get notified of when WriteLaraWrite is returning, be sure to subscribe to the blog, follow on Twitter, that sort of thing. (Use the buttons on the left column)

In lieu of a post this week, and to get you through the next couple of weeks while I pack up and move across country, I am going to send you fine people over to PaperWings Podcast!

PaperWings Podcast is a podcast and blog for comic writers and illustrators. They’ve got some really awesome posts about storytelling over there, and their recent posts about conflict are so good, I’m not even going to bother to write about the topic right now. Some people call it laziness, I call it resourcefulness and spreading the love. Chris and Lora are great people, and I think you’ll enjoy their words.

Without further adieu, here’s the series on conflict from PaperWings:

See you in a few weeks, my darlings! I will try to update when I can, but no promises until a few weeks from now. We will definitely be back to speed in August, so long as I have Internet. Or a babysitter so I can find some Internet.

This is Part Two in the Write, Edit, Repeat Character Series.

Backstory is whatever happened to the characters before the story starts. It’s the stuff that the writer knows (or discovers), but what doesn’t show up in the story that the reader is reading.

Backstory is the reason we have Pottermore. Rowling had so much backstory that she could make an entire interactive experience for her readers out of it. An obsessive fan base and millions of dollars to create it doesn’t hurt.

Anyway, the most logical visual for backstory is an iceberg. All the stuff under water might be interesting, in fact, it might be really really good. But if it isn’t absolutely necessary to drive the story forward, then it doesn’t need to appear above water, in the finished piece. END_OF_DOCUMENT_TOKEN_TO_BE_REPLACED

Happy book birthday to @ericsmithrocks and DON’T READ THE COMMENTS! (📷: Major, who picked up my order on his lunch break 😍)
🤷🏽‍♀️ #dollypartonchallenge
Get you a dog who can do it all.
Looking forward to more time with this guy this weekend. #nevilleshortquarters
#toonme looked too fun to pass up, and it gave me an excuse to finally try Procreate. Lots to learn, but I’m excited to start making things again!
What we’re reading: 9yo asked to read Percy Jackson (Yay!) I’m reading Inside Story to start my creative thesis semester off with a bang of inspiration. #champreads #mfaclara #currentlyreading
*exhale* Done with my fourth residency, finished my critical thesis presentation, still somehow channeling Courbet’s “Desperate Man” even though I feel <whatever the opposite emotion of desperate is> On to my last semester! #HamlineMFAC #MFACLara
Yesterday Me, you survived tonight’s reading. And Today Me has evidence that people laughed at your weird sense of humor, so now we can all be equipped for Next Month Me’s imposter syndrome*! All the love to the talented (and supportive) #hamlinemfac readers! 😍 *The all too familiar ”Why do I even try, I’m a worthless writer syndrome”
I’ve been waiting half my life to share the LOTR movies with my kids. The day has come. Happy (belated) birthday, Tolkien.