I claim without reservation that Lin-Manuel Miranda is Shakespeare 2.0. The composer/playwright/actor is heavily inspired by Shakespeare, which is evident in his Pulitzer-Prize Winning Hamilton, a strategically constructed historical tragedy.

What makes Hamilton so great? What is all the fuss—the buzz—about? Miranda’s lyrics and beats themselves are marvels, but it’s how he threads them together through universal themes that gives Hamilton its resounding resonance. (Look at me—I’m not even editing alliteration today.)

Each of the three primary characters in Hamilton has an armature, a theme which progresses through repetition and reversals to give each their own character arc.

While listening to the soundtrack of Hamilton, I took notes on repeated words, phrases, and motifs as I recognized them, thinking the repetition and reversals would be a great theme for a blog post…

After just one listen-through, I had five single-spaced pages of notes.

If you were wondering why I haven’t blogged in a while—it’s because I’ve been trying to decide which motifs to highlight. It’s because after taking my own notes, I’ve spent hours on Genius reading the annotated lyrics.

Obviously this post will be filled with spoilers if you don’t know Alexander Hamilton’s historical fate. I highly recommend listening to the full soundtrack, whether before, during, or after reading the following insights. Do note, however, that the lyrics are explicit and as such are likely not appropriate for children or work.

First let’s start with the most prominent motifs; then we’ll look at the primary arc for Eliza, Burr, and Hamilton.

END_OF_DOCUMENT_TOKEN_TO_BE_REPLACED

There are a few days left to enter my giveaway for Marvel’s Pride & Prejudice graphic novel. To enter, click here. 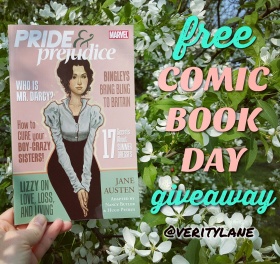 In other news, the StoryWorldCon courses now have their own website: StoryCadet.com.

The Cadet Course (for pitching and submitting your stories) will start June 8 and go for eight weeks. Find out the different pricing options and the schedule here. If you purchase the complete workshop before June 1, you get an extra $10 off!

Curious about what it takes to become a freelance editor? Soon I’ll be doing another #AskEditor series and sharing my chat with my 2015 intern about how I got into editing and my advice for freelancers-to-be.

What are your goals for the new year?

One of my goals was to start a YouTube channel—it’s a way for me to bring a more multimedia experience to the blog. It also helps me break up the monotony of text-only blogging. I’d rather tell you about my favorite books than write to you about them. Plus I’m a visual person, and I’m really excited to become a part of the BookTube community. And I’m excited to start interacting with you all in a different medium.

Are you on YouTube? What are your favorite channels?

The next few posts on here will be video-heavy as I talk about my favorite books of 2015, but then I’ll get back into more writing topics. Is there anything in particular you’d like to know more about? Anything you’d like me to revisit? I’m open to suggestions!

“You look like a divorced dad.”
Extra Yarn is $10 at Barnes and Noble with the purchase of any kids book. It’s one of my favorite read-alouds by my favorite picture book duo. @barnesandnoble
If you’re going to get a perm, you go to the lady who has been doing this since the 70s and trained under Vidal Sassoon and Paul Mitchell in San Francisco. She’ll tell you about the clients and friends she lost to AIDS. She’ll hand you a Jazzercise T-shirt to put on that is probably the same shirt you had on in ‘98, when you were actually in Jazzercise and your grandma permed your hair in the kitchen twice a year. And maybe perms aren’t in style or maybe they will be in a couple years (“because everything comes back, you know”), but you’re old enough to not care, and old enough to appreciate a veteran stylist, even before she tells you that she has to go pick up one of her clients today because she had another hip replacement and can’t walk to the salon for her haircut.
‘Tis the season for mixing patterns.
Decisions, decisions. What should we name our rescue box turtle? She’s 20-25 years old, born around the turn of the millennium. Millie? Olive? Shirley? Mako? Something else? We’re stuck.
My boys came to art club tonight and tried throwing on the wheel. 8yo kept at it for two hours! Harry’s got nothing on this little potter.
Shenanigans at our living room sleepover. The dogs are both feeling much better!
Mom, look at the hideous faces we drew!
Lucy spent the day at the vet on an IV because the 8yo spilled Neville’s heart meds and she ate a bunch of them, spiking her heart rate to 260 bpm (normal for her is under 120). My own heart has been speeding and breaking for the past 24 hours with so much going on at school (more vandalism, and some teen tried to start an electrical fire outside my room) as well as family things. Glad this goose is back home, and thankful.