Jaws is the property of Universal Pictures.

(It was never on TV or streaming when I could watch it!)

Like all the big films I’ve been watching this semester—two other finally-watched 70s classics were The Godfather and Chinatown—I was taking notes while watching it, which includes having the screenplay up on one half of my screen while I take notes on the other half.

I pretty quickly realized that the script I had up was not the final one. Scenes were different, dialogue was different.

So of course Quint’s language in the film struck a chord with me like a hammer on piano wire.

And I want to share his first monologue with you. But before I do, I want to share what the original script had him say, because comparing the two is such a great lesson in rewriting to strengthen voice.

I’m going to number the sentences for easier comparison.

Not bad, right? But not explosive, either. And Spielberg likes explosive.

Doesn’t this read differently? Same content for the most part, but edited and refined. THIS is explosive diction. THIS is what makes nerdy writers blog even when they should be writing essays for grad school … (oops.)

Go ahead and look between the two and compare sentences.

Then, since we are already getting our nerd on, making sentence graphs and everything, why don’t we count the breath units? (Those are the number of syllables between breaths or punctuation points.) It’s OK if you want to skip ahead to the video. No judgment.

And since I’m a visual person and numbers start to lose meaning after, like, four of them, here’s a visual:

While the first graph looks more like a roller coaster, which emotionally or intuitively might feel better for a writer to come up with, the second graph is tighter and shows a more natural and consistent flow in a character’s speech.

Why the breath units again?

If you can’t explain why something doesn’t sound right, check out the breath units.

Is counting syllables tedious? Sure. Eventually you’ll train your brain and your ear to hear a more natural rhythm.

Do all of your sentences have to be short? No. But if you look at the differences between the rhythm of the first graph and the second graph, you can see that the more natural-sounding speech doesn’t go from three syllables to 37, just like that. And if you try to say 37 syllables in a row without breathing, your lungs will feel how unnatural lengthy breath units are, simply because humans need to breathe. Twenty-five syllables or more might not look impossible on the page—and sometimes, when we are nervous or anxious, we can spit out a lot of syllables breathlessly—but readers and actors will pick up on dialogue that is unspeakable.

We know that Robert Shaw, the actor who played Quint, rewrote his major monologue near the climax of the film:

In addition to being an Oscar-nominated actor, Shaw was an award-winning writer of novels, plays and screenplays, and when he took a crack at polishing up the monologue, he made it into something unforgettable. Spielberg asserts that the monologue was a joint effort between two screenwriters and Shaw, while others say that Shaw did the heavy lifting to make the monologue so perfect.

I assume that Shaw is responsible for this monologue’s rewrite as well.

Written out, the monologue might seem unrealistic, even silly: “Bad fish.” But in the hands of a master actor, it feels natural.

How did Shaw rewrite it? It wasn’t just that he was an award-winning writer. It’s because he spent so much time listening to a real local fisherman, Craig Kingsbury, a resident of Martha’s Vineyard. After listening so intently to a real-live person, Shaw was able to bring that authenticity to his work.

And here it is:

For more tips on writing realistic dialogue, read my guest post at The Better Novel Project.

Do you have a favorite voice in fiction or film? Share in the comments or tweet me @LaraEdits.

Twitter is abuzz right now about agent responses to filtering.

Filtering language distances the reader from an experience by filtering it through another character. Removing the filter allows the reader to experience firsthand rather than secondhand.

If you read, “Abraham Lincoln saw snowflakes out the window,” you’re probably picturing a window with snowflakes falling down, the view slightly obstructed by the president’s trademark stovepipe hat. But if you read, “Abraham Lincoln went to the window. Snowflakes were falling and sticking to the glass,” you see Mr. President going to the window, and then you see what he is seeing, for yourself. The first example had filtering. The second did not have filtering.

Keep reading for more types of constructions some readers might find bothersome. Click “View Original Post” and skip to the very bottom for a list of overused words you can refer to while revising. 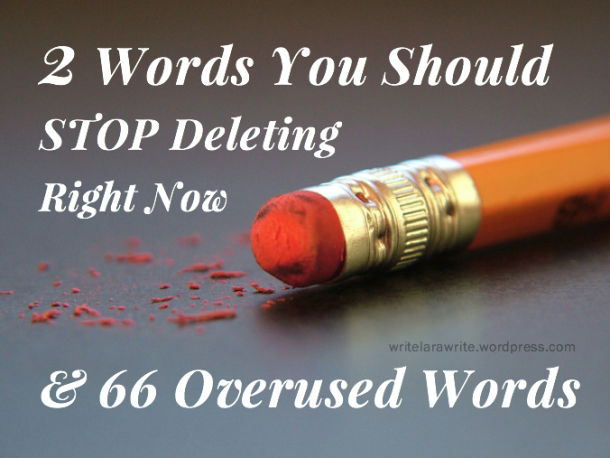 If you spend some time in writer critique circles, I’m sure you’ve heard the well-intended advice to delete words “that” or “was” from your writing. I’m here to clarify when you should, and when you SHOULDN’T, delete these words.

Once you’ve read the lesson, I’ve got a master list of commonly overused words for you to refer to while revising.

Sometimes a sentence needs the word “that” in order to be read correctly. For example:

He knew from the way I carried myself and the name tag I had been
wearing my father is mayor.

He knew from the way I carried myself and the name tag I had been
wearing that my father is mayor.

On Wednesday’s last 7th on 7th, I reviewed the previous pages I’d revised and winning pg70pit entries I’d deconstructed, showing you what to do, what not to do, and how to fix red flags in your entries. Today I have a checklist for you to improve or strengthen the style and voice for one page (and hopefully beyond).

I say this all the time because writers still don’t do it. Voice is how the text sounds, whether to your literal ears or to your brain’s internal ear. The words might not look awkward to you on the page, but they might sound awkward. Print out two copies of your page(s) and have a friend read the text aloud. On the other copy, you highlight parts that sound awkward or where the reader ran out of breath.

If the reader is running out of breath, that means your breath units are too long. The number of syllables between punctuation marks should be fewer than 25, with most falling between 8-15. END_OF_DOCUMENT_TOKEN_TO_BE_REPLACED

This is 2016’s final 7th on 7th, where I take a blog subscriber’s seventh page and show you how I’d improve it for the upcoming #pg70pit contest. See the #70pit16 contest schedule here. See more about how to enter the contest here.

Lucy was a big hit with my high school students (and a lot of strangers!) at the play this weekend. Neville got some good scritches too.
Your daily dose of puppy
We need a new net. Maybe the HOA will tell us we can’t have a trampoline (though a neighbor has one). But today I’m content with my boys and my pups and the gorgeous weather.
Raising a mug to all the moms, biological and matter-of-fact, of humans and critters today. May you get ample rest without bickering, barking, stomping, or tackling in your direct vicinity. *clinks earplugs like champagne glasses*
Personal brand
Lucy Chew thinks you should all read Yesterday is History by Kosoko Jackson.
PUPPY NAME ELIMINATION
Wednesday we went to the shelter to see some adult dogs. 8yo fell hard for this little one. Thursday Neville met her and we took her home. Friday we got the keys to our new house. Saturday we moved in. We are fostering her until Monday, when we have to bring her back to get spayed and checked out again by the vet. Neville has...feelings. He’s very jealous but has been pretty good with her, as long as she doesn’t try to bite him. Still deliberating on a name! Shelter says terrier mix.
Surprise puppy time!