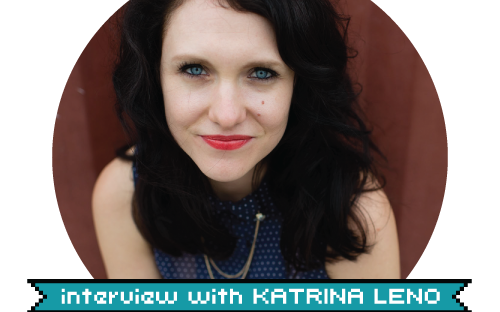 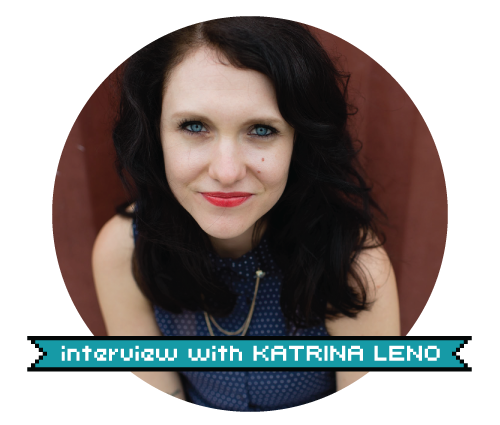 Katrina Leno’s debut novel, The Half Life of Molly Pierce, is coming out July 8th! Order it at The Book Depository, Barnes and Noble, or Amazon.

Hi Katrina, thanks for agreeing to do this interview! Most of my readers are unpublished authors, and I’m sure they’d love to hear your journey as a writer, especially through drafting, editing, and submitting. First, how did you deal with rejection?

I’ve heard so many horror stories about the publishing industry, about people trying to get books sold for years and years… But I have to say, I had the most positive, encouraging experience from the very beginning. Even my rejection letters were kind and honest and said things like “We JUST bought a book like this, otherwise we would scoop this up!” or “You are so talented and your book is great; it just isn’t right for our list for the following reasons.” I think as far as rejection goes, you just have to really understand that there are BILLIONS of people in the world. Not all of them are going to respond to your book. And that’s really okay. Read your rejection letters, though. Try and glean some wisdom. These are really smart, intelligent professionals who have taken the time to read your work. Why don’t they want to buy it / represent you? Is there something you can do better or differently next time? Use your rejection letters as a tool for your own improvement. Find the positive. And then mooooove on.

Great advice. So how did you find your agent?

I actually queried a very small handful of agents, because I get overwhelmed easily and didn’t want to put myself in a weird position—querying fifty agents and then getting them all mixed up or something. I sat down with Writer’s Market and a pad of paper and took notes on everyone that immediately stood out to me. Then I did research on their current client list and what sort of books they represented. In the end I queried a very small group of agents. I received two offers for representation, and one request for a rewrite and resubmission. I spoke to the three agents on the phone and made my decision based on how our conversations went. I am OVERJOYED with my agent. She is truly a gem. So, the takeaway here: take your time, do your research, make sure you’re querying agents that make sense for your book, and make sure you’re sending them EXACTLY what they’ve requested (the quickest way to get your query chucked into the slush pile? Sending them twenty pages of writing when they’ve only asked for ten. Seriously. Follow instructions!). It took me about two months from when I started querying until I found my agent.

Next step: My agent then queried a small handful of publishing houses, and one by one they all said no. BUT, they all said no in the thoughtful ways I mentioned above. So the rejections really didn’t bother me, because they all made sense. I chose to look at it as a learning experience. It’s all about perspective! I could just as easily have taken to bed and spent weeks sulking as each new “no” came in.

A good perspective to have! (I’ll try to remember that the next time I reach for the ice cream.) What was your reaction when you heard about your deal with HarperCollins?

When I finally got that “yes” from HarperCollins… My agent emailed and asked if she could call me. I was alone in the house. I took her phone call in the kitchen and as she talked, I sat on the floor. I didn’t move for ten minutes afterward. My body was in complete shock. It was the best feeling, but completely overwhelming. I’d spent so long coaching myself not to get bummed out about the rejections that I was wholly unprepared for the “yes.” But—unprepared in the best way possible.

You mentioned on Twitter that you quit your job. What was your day job, and what are you working on now?

Oh man, I just quit my job! Every time I think about that, I feel SO HAPPY. It was the best decision. I was working as a retail manager in a really negative, caustic environment and it was stifling any sort of creative energy I was trying to access. I am EXTREMELY lucky that I am able to take a couple months off in order to re-center myself and, hopefully, write another book. Right now I’m working on a novel that’s been brewing for a number of years and has taken many different forms during that time. Maybe it goes without saying, but I LOVE writing, and I am happy it’s all I have to focus on right now. I am the best version of myself when I am maintaining a word-count-based writing schedule. (Currently: 5K words a day. This is lofty, and I don’t beat myself up if I don’t quite get there, but I damn well make a huge effort to do so.)

Five thousand words every day? Nice! How long did it take you to write The Half Life of Molly Pierce?

My first draft of HALF LIFE took me three weeks to write. I was kind of like an author possessed. I truly worked some eight- and ten-hour days, pausing only to get lunch or refill my coffee. I was just so READY to write this novel. It burst out of me fully formed, the most cathartic experience I could have hoped for.

Any idea how many revisions you went through? Any darlings you had to murder?

My editor, agent, and I went through, I think, four revisions? But there was never a massive overhaul, no huge rewrite. It was mostly little things, like changing a few names and reversing the last two scenes the book. I didn’t have to murder any darlings for this one! My second book, though … That’s been another story!

How long have you been writing?

I started writing and reading a lot when I was in grade school. When I was twelve or thirteen I asked my mom how novels are made. I was in this heavy Stephen King phase at the time, and I’d just had this earth-shattering revelation that Stephen King was a grown-up person, and he had written these novels and given them to the library (I was fuzzy on the process). I wanted to do that, too. My mom gave me TERRIBLE advice (sometimes moms are fuzzy on the process, too … she told me that there were computer programs that wrote books, now. She doesn’t remember saying this) but I was smart enough not to listen to her. I wrote my first novel about an alien entity that could jump from one body to the next, taking over consciousness for a period of time before moving on. It was called JUMPER, and it was truly horrible. But it marked the start of a journey. And I hope each thing I’ve written has gotten slightly less horrible.

I’m sure all of your characters are your brain children, but if you had to pick a favorite, who might it be?

For HALF LIFE, I really liked writing Lyle because he was so different from anyone that Molly, my MC, has so far encountered in her life. She’s surrounded by positive, supportive people, and then you have Lyle—who’s selfish, egotistical and incredibly immature. It was a challenge to make him so flawed without making the reader hate him. I mean, I want people to care that he dies (not a spoiler! He dies in the first chapter) and I want people to feel sorry for him—that he’s never able to grow up. He’s a good guy, really. He just hasn’t realized that yet.

You have a gorgeous blog combining two of my favorite things—words and pictures. Can you share a picture of your favorite place to write?

Ohhh, thank you! My blog is so personal, I’m surprised whenever someone actually likes it. Sometimes I think I should make it more about writing or my books, but it always feels a little disingenuous when I put that sort of stuff up there. I’m not sure why! I’m trying to get over that. As far as my favorite place to write… This is where I used to write when I lived in New York. I had a studio apartment in Crown Heights in Brooklyn with these three gorgeous windows. I spent hours and hours in that grey armchair, and it was where I eventually wrote the majority of HALF LIFE (although the chair and I weren’t in Brooklyn anymore, we had moved to Connecticut). I love that chair.

If you could have any superhero power, what would it be?

The ability to freeze time. It’s moving much too quickly.

Which Hogwarts house would you be sorted into?

I think Ravenclaw, because I’m not overly adventurous and I like learning new things. And I read too much to be in Gryffindor. I don’t have time for rescuing people from giant snakes.

To Make You Feel My Love, which was actually written by Bob Dylan but first released by Billy Joel. This has been my favorite love song since I heard Garth Brooks’ version when I was a very young, sentimental kid. I think there’s something pretty magical about unironic love songs.

How about this: if I could somehow smash together the writing of Gabriel Garciá Márquez, Donald Barthelme, and Vincent Van Gogh, the ensuing novel would be the exact thing I want to write. Someday I will get there.

Are you an author that has been (or will soon be) traditionally published? I’d love to interview you and turn you into your own adorable 8-bit sprite! Contact me on Twitter or e-mail me: lara willard at icloud dot com.

One thought on “Author Chats: Interview with Katrina Leno”

Lucy was a big hit with my high school students (and a lot of strangers!) at the play this weekend. Neville got some good scritches too.
Your daily dose of puppy
We need a new net. Maybe the HOA will tell us we can’t have a trampoline (though a neighbor has one). But today I’m content with my boys and my pups and the gorgeous weather.
Raising a mug to all the moms, biological and matter-of-fact, of humans and critters today. May you get ample rest without bickering, barking, stomping, or tackling in your direct vicinity. *clinks earplugs like champagne glasses*
Personal brand
Lucy Chew thinks you should all read Yesterday is History by Kosoko Jackson.
PUPPY NAME ELIMINATION
Wednesday we went to the shelter to see some adult dogs. 8yo fell hard for this little one. Thursday Neville met her and we took her home. Friday we got the keys to our new house. Saturday we moved in. We are fostering her until Monday, when we have to bring her back to get spayed and checked out again by the vet. Neville has...feelings. He’s very jealous but has been pretty good with her, as long as she doesn’t try to bite him. Still deliberating on a name! Shelter says terrier mix.
Surprise puppy time!