Psst…Are you on Twitter? If so, follow @LaraEdits! Today I tweeted the difference between formal and fiction writing. 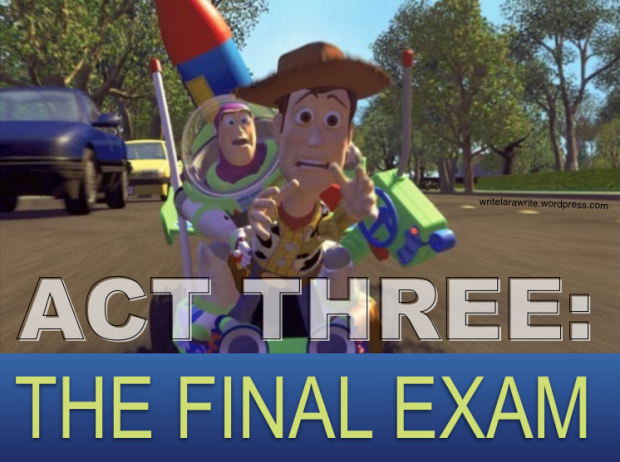 Posts in this series so far:

I talk about the second act in my series on plot. Here I’ll continue examining how these 8 C’s of Plotting combine with Theme in Toy Story‘s second act.

Last time we left Woody, his motivation changed—instead of being motivated by his desire for position (both the physical spot on Andy’s bed and as the head honcho among toys), he’s now motivated by a desire to be a good friend. The “Break into 3” is the comprehension, as you’ll remember:

BUZZ
Come on, Sheriff. There’s a kid
over in that house who needs us.
Now let’s get you out of this thing.

Once out of the gloom, the character needs to make a new plan, which starts Act Three.

Act Three’s Action, Curveball, Final Battle, Culmination, and Resolution are similar to Act Two’s Preparation and Problems through its Elation period. Here’s how they match up:

The differences between the three acts are motivation, growth, and theme.

Sometimes the theme is demonstrated by a dilemma: The character is put in an impossible situation, needing to choose between A or B. Both are important, and the loss of either would be deeply felt. The character comes up with a new option, Choice C, which is chosen at the Culmination.

Brian McDonald, story consultant to Pixar and an expert on the subject, sums up the theme’s progression through the acts in two ways:

Read his thematic analysis of The Godfather here.

Woody’s in “jail,” Buzz has a rocket strapped to his back, and here a moving truck comes to take Andy away forever. A nice reminder of that ticking time bomb. We have to know—What’s next?

We end with some character development…

I can’t do it! Take care of Andy for me!

…before Buzz sacrifices himself for Woody, jumping off the truck to tackle Scud. (mutual relationship development)

Woody unlocks the back of the truck and looks for something—he’s got a plan, but we don’t know what it is. He tears into a box labeled “Andy’s toys.” The toys react, but he ignores them (more development) and looks in another box. He finds the RC car and its remote, then throws RC out of the van. The other toys scream—now they have no doubt Woody is a toy murderer. Woody drives RC over to Buzz. The toys charge Woody. Woody’s being attacked by toys while trying to drive RC and Buzz toward the moving truck, away from Scud, and through traffic. It’s a chase and fight scene full of obstacles, and it ends with the Curveball:

The mob of toys lift up Woody (still holding the remote) and
head for the open back.

WOODY
No wait! You don’t understand!
Buzz is out there! We’ve gotta
help him!!

The toys toss him out into the road. As the truck drives
off, the toys CHEER.

The “Final Battle” is the last fight in the war. However, perhaps a better way of seeing it is as a final exam. Everything that the character learned is now put to the test.

First, a sequel to the curveball: Woody gets up, is nearly run over, and then gets swooped up by Buzz and RC. Then he’s ready for his final test. Let’s see how he does:

A car drives by, extinguishing the match. Miniature gloom as all hope seems to be lost.

WOODY
Ahhh!! This is the part where we blow up!

The culmination is the end of the final battle.

Buzz confidently presses the button on his chest. Wings jut out of Buzz, severing the tape that holds him to rocket. The toys separate from the rocket just before it blows up. The toys plummet.

Just then Buzz banks under some power lines and soars upward
again. Woody takes a peek.

BUZZ
This isn’t flying. This is falling — with style!

WOODY
Ha ha!! To Infinity and Beyond!!

They soar gracefully towards the moving truck, but then pass
over it.

BUZZ
We’re not aiming for the truck!

Buzz and Woody fly right over the van’s sun roof and then
drop into the car.

Buzz gets his character development, too. The B Story is tied up nicely.

Andy finds Woody and Buzz in the seat beside him. He hugs them, and the two toys wink at each other.

At Christmas (this scene could be considered a small Epilogue), Andy’s toys are anxiously waiting to hear what new toys Andy will be getting—a nice parallel to Andy’s birthday at the beginning of the movie. The toys have hit a new normal. Woody isn’t afraid of not being the best or the favorite anymore.

But Buzz might be nervous about Christmas. He asks if Woody is nervous.

WOODY (laughing)
Now Buzz, what could Andy possibly
get that is worse than you?!

We ZOOM BACK through the window to a CLOSE UP of Buzz and
Woody.

They look at one another with a half-smile, half-grimace and
laugh weakly.

Remember Woody’s belief/goal from Act One and his experiences in Act Two:

Being the best isn’t as important as having a best friend.

Let’s check that theory with what characters say, with what they do, and with the music.

What does your character believe in Act One? How will her experiences in Act Two change that belief? What is the final theme or message of your story?

Did you use any tools or abilities you’ll need to later implant in the “Preparation and Problems” section? Make a note of those to include while revising—don’t go back to the beginning until you’ve finished your first draft.

Did writing your ending give you ideas for starting your story in a different place? Is there a way you can wrap up the story that would pay homage to your beginning?