These character packets will help you organize your characters’ traits in one central location.

Have you ever written a character who had short, lustrous hair in chapter one and frizzy ankle-length hair in chapter fifteen? Okay, maybe not. But perhaps your character had gray eyes in one chapter and green ones in another. Or maybe his or her last name changes halfway through the book.

Collect all of your information together with these worksheets in lieu of scraps of paper and sticky-notes all over your office, kitchen, computer, and sister’s house.

But if the sticky-note system works for you, or you are happy with Evernote or you have another way of organizing facts, then you can still use this resource to help flesh out your character.

As you might have garnered from past posts, I’m a graphic designer by trade, a writer by love. Either way, I like options, so I designed two different worksheets, and you can pick your preference between the two.

Finding these downloads helpful? Consider leaving a tip so I can create more free resources, like these worksheets and quizzes! 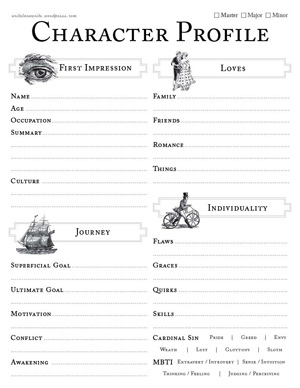 Each is two pages. The lines are WIDE-RULED, so you can either write really big, or double up with smaller text.

Breakdown of the categories

, one of THE best condensed resources out there. Smith’s pocket-sized book was one of the inspirations for the 8 C’s of Plotting. Anyway, Master characters are the protagonists and main antagonist. Harry, Ron, Hermione, and Voldemort are Master characters (though Voldemort may be more of a Major character since we don’t see from his point as view as often—you decide.). Major characters are for the supporting cast—Dumbledore, Dumbledore’s Army, Snape and the other professors. Minor characters are the characters the reader doesn’t really see much of, but they can develop into a major character over time, like my favorite wizard, Neville Longbottom. If you are writing a single novel, you may as well not bother to fill out all of the information in this packet for them.

Name—This should be self-explanatory. Fill out the middle name and last name if you want, even if it never shows up in the manuscript. Since the lines are wide-ruled, you may want to include a little note of what the name means or its origin above or below the name itself.

Age—37. Young adult. Fourth-grader. College aged. Be as specific here as you will be in your writing. Readers want an idea of the protagonist’s age early on.

“‘Do you remember Mark, darling? He’s one of those top-notch barristers. Masses of money. Divorced.'”

—Bridget’s Mum, from the book

“The rich, divorced-by-cruel-wife Mark—quite tall—was standing with his back to the room, scrutinizing the contents of the Alconburys’ bookshelves: mainly leather-bound series of books about the Third Reich, which Geoffrey sends off for from Reader’s Digest. It struck me as pretty ridiculous to be called Mr. Darcy and to stand on your own looking snooty at a party. It’s like being called Heathcliff and insisting on spending the entire evening in the garden, shouting ‘Cathy’ and banging your head against a tree.
“He turned round, revealing that what had seemed from the back like a harmless navy sweater was actually a V-neck diamond-patterned in shades of yellow and blue—as favored by the more elderly of the nation’s sports reporters.”

—Bridget’s narration, from the book

WHAT BRIDGET SEES: a solitary figure by the window, his back to the room, his head turned in handsome profile, his whole posture indicating haughty disengagement. This is MARK DARCY. Bridget’s reaction shows some interest—he’s a rather romantic looking figure.

Culture—Where the character grew up, what she or he is used to, and where she or he is now. Hometown and current residence are something to consider here. If the protagonist is a small town-girl who moves to the big city and ends up rooming with four supermodels, it’s going to affect the story (Head Over Heels—I’m going to use as references the first movie that pops into my head. You’ll quickly find that I am not quite a film elitist). Is the protagonist adopted? Uptown girl or downtown guy?

Family—Who is the character related to who shows up in the book? Just the names suffice here, so you can reference other characters’ worksheets. If your character loves his mom but despises the husband who left her, note it.

Friends—Names of friends as they appear in your work.

Superficial Goal, Ultimate Goal—We talked about these last week. Since you probably won’t fill out an iceberg for each character, you can put the goals here. Major and Minor characters may only have superficial goals that show up in your story, and that’s completely fine. Save the ultimate goals for the Master characters.

Motivation—if the goal is what the character wants, the motivation is why. This may or may not correspond to the character’s “cardinal sin” (see below).

Conflict—when one person’s goals get in the way of another’s, you get conflict. Note here who or what is at ends with this character.

Awakening—this is the change your character goes through. Not all characters will change in the story, but the protagonist should. This doesn’t have to be a Voice-of-God-coming-from-the-clouds epiphany. Read Flannery O’Connor’s short fiction to see characters who have awakenings. Remember, you don’t have a story if your protagonist doesn’t change.

Flaws—This is borrowed from Aristotle’s fatal flaw. Characters are more realistic and relatable if they have flaws. Tony Stark is a selfish womanizer.

Graces—But Iron Man is charming and smart. Even the bad guys need to have saving graces. Fangirls often think that the bad guy is adorable. Loki, Snape, and Draco have many die-hard fans. It’s a bit harder in books, though, when you can’t rely on the cuteness of the cast. Snape’s saving grace isn’t revealed to readers until the final book, but Rowling hits the ball out of the park with his Grace.

Quirks—this is what makes my favorite characters. BBC and USA are networks that really “get” quirks. Michael Weston (Burn Notice) apparently only eats yogurt. Adrian Monk (Monk) is an OCD detective. Shawn Spencer (Psych) is a fake psychic detective. Sherlock Holmes (Sherlock) doesn’t know that the earth revolves around the sun. Each Doctor (Doctor Who) has his own quirks: bananas, fezes, bow-ties, brainy-specs, scarves, celery and cricket…

Skills—these are skills or talents which affect the character or the plot. If abilities are going to come in handy later, put them down here. Harry is a skilled Quidditch seeker, Ron is really good at Wizard’s chess, and Hermione is brilliant at solving problems. They all need those skills to get to the Sorcerer’s Stone.

Cardinal Sin—One way of thinking through a character’s motivation is which of the seven deadly sins he or she is most tempted by. I once saw, in an ice cream shop of all places, the seven characters from Gilligan’s Island typed this way. I think it was as such, but I could be wrong: Gilligan=sloth, the Skipper=wrath, Mr. Howell=greed, Mrs. Howell=gluttony, Ginger=lust, Professor=pride, Mary Ann=envy. Circle one or two that may motivate this character. Note: Remember that characters have varying levels of self-control. Mr. Howell’s greed is blatantly obvious, but the Professor controls his pride on the outside. Inside he’s probably hoping that Mary Ann is really impressed with his coconut phone. (Read more examples of cardinal sins and character motivations.)

MBTI—The Myers-Briggs type system. Check out my posts and downloads for more information about MBTI. You need to choose one option from each of the pairs, for example: Introvert, Intuitive, Thinking, Perceiving. (That’s me!)

Diction—Diction is word choice. What sorts of words does the character use while speaking? Anglo-Saxon words? Latinate words? Colloquial words? I talk about diction and words on Wednesdays when I get the chance. Read what’s been posted so far here.

Sample Syntax—Syntax is grammar, how a sentence is arranged. Put examples of this character’s everyday dialogue here, so you can get an idea of the character’s voice and rhythm.

“I coulda taken Wilson apart! So what happens? He gets the title shot outdoors on the ballpark and what do I get? A one-way ticket to Palooka-ville! You was my brother, Charley, you shoulda looked out for me a little bit. You shoulda taken care of me just a little bit so I wouldn’t have to take them dives for the short-end money.” (Example of regular dialoge from On the Waterfront)

“Well, when an adult male is chasing a female with intent to commit rape, I shoot the bastard. That’s my policy.”…”I know what you’re thinking. ‘Did he fire six shots or only five?’ Well, to tell you the truth, in all this excitement I kind of lost track myself. But being as this is a .44 Magnum, the most powerful handgun in the world, and would blow your head clean off, you’ve got to ask yourself one question—” (Examples of regular dialogue from Dirty Harry)

“I coulda been a contender.” (Catchphrase from On the Waterfront)

“Frankly, my dear, I don’t give a damn.” (Poignant from Rhett Butler)

“How you doin’?” (Repeated line from Joey on Friends)

I had to format these categories a little differently depending on the design (Mod or Vintage), but they should be pretty self-explanatory. For each of the categories, start general and work your way to the specific. You might fill this in as you are writing. Either way, write in pencil. Just write down specific words or phrases. Is a character’s body as short as an eighth-note? Is his skin russet brown? Is her hair long and flaxen? Does he have a lightning scar? Is her movement lumbering or graceful, as though she were floating on a sea of dreams? Is her style business casual or bohemian chic?

Here are some ideas of how to fill them out.

Accessories—a little yippy dog she keeps in her purse, an autographed electric guitar kept in a glass case, bangles, lemon-scented moist towelettes. You haven’t considered accessories until you’ve read The Things They Carried

by Tim O’Brien. Read the first chapter of the book or find the short story by the same name (same thing, published differently).

Back of the Sheet

Use the backs of the sheets (or a different piece of paper or a folder on your computer) for images for the character. Cut and paste pictures of people with the right look, clothes the character would wear, colors, etc. I have casted every character in my book as a minor or major celebrity. Having the same visuals in front of you will help you describe your character consistently to your readers. If you have some artistic talent—or even if you don’t!—feel free to draw the characters, too.

Did you find this information useful?